Form of liposculpting that removes excess fat between the abdominal muscles, creating indentations resembling six-pack stomach. It selectively removes fat around the natural muscular contours, which is very difficult to get rid of even with tireless stomach crunches and sit-ups.

Patients who are already in shape with minimal fat pad

Type of anesthesia - Performed under general anesthesia as daycare or overnight stay.

High definition Liposuction is performed through several one to two millimeters incisions within the umbilicus and natural creases of the abdomen.

Compression garment to be worn for three months to minimize swelling and maintain new body contour.

Six months to one year for the final result.

Your treated areas should look great and retain their sculptured appearance for as long as you remain the same weight. If you gain weight, you will generally gain it in areas other than those that were treated.

Before & After Six Pack Abdominal Contour 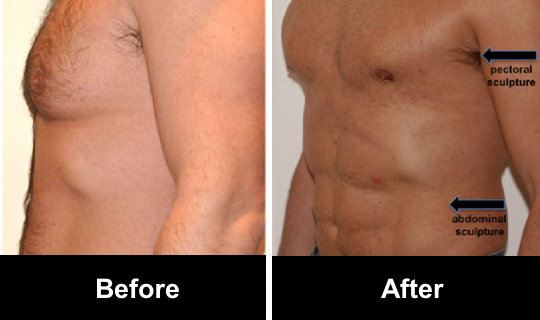