Gynecomastia vs. Chest fat: What Is The Difference

The abnormal growth of tissues and glands in the male breast is known as gynecomastia. Gynecomastia can often develop in males throughout adolescence and go away on its own over time, although some men get it later in life. Anything from hormonal imbalances to using specific drugs could be responsible for this condition.

Man boobs, also known as male breasts or pseudogynecomastia, are an accumulation of fat on a man’s chest. A buildup of chest fat or a testosterone/estrogen ratio that is out of balance may be to blame for the growth of the breast tissue.

In contrast to ordinary chest fat, gynecomastia is brought on by an overabundance of glandular breast tissue in the pectoral region. Weight gain can cause fat to collect in the chest, and unlike gynecomastia, it can be treated with diet and exercise. But surgical intervention is frequently needed to address gynecomastia.

It’s critical to understand the distinction between extra weight in the chest and gynecomastia. Below,  We will discuss some of the methods used most frequently to distinguish between gynecomastia and chest fat.

Difference Between Gynecomastia And Chest Fat

For males who are overweight, chest fat or pseudogynecomastia is relatively widespread. If you are obese and have a high body-fat percentage, you have a higher chance of developing chest fat. It stands to reason that the chest area would exhibit the same extra fat buildup as the other body areas.

The accumulation of fat on the chest is quite prominent and particularly obvious. The likelihood of pseudogynecomastia or chest fat in a person with a slender build or a high proportion of lean body mass is quite low.

Gynecomastia is a typical teenage condition that normally resolves on its own without any medical treatment necessary. During this time, young males frequently experience hormonal imbalances that might result in the development of male breasts. Gynecomastia can occur in old age when testosterone levels are low. Some other causes of gynecomastia may also include: 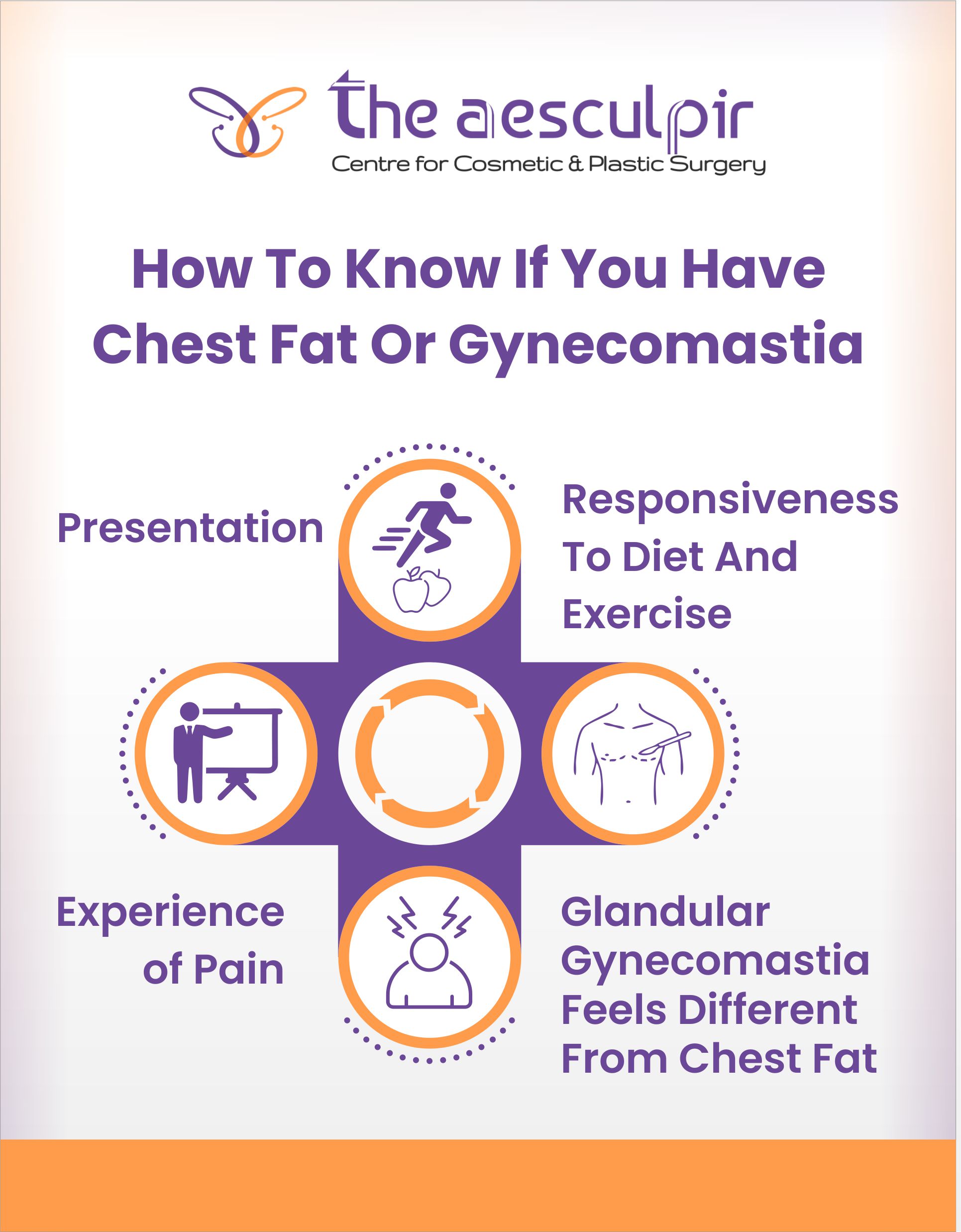 How To Know If You Have Chest Fat Or Gynecomastia

Since the appearance is essentially the same, we could technically refer to both as man boobs, but what’s underneath is what matters. The first step in understanding your options is determining if you have only fat or fat and gland .

You can tell the difference between chest fat and gynecomastia by looking at your chest. The diagnosis can be made by remembering the following essential differences:

#1. Responsiveness To Diet And Exercise

True breast tissue that is fibrous and firm and does not respond to diet and exercise is known as glandular gynecomastia. While increased chest fat and enlarged fat cells in the pectoral region are symptoms of pseudo-gynecomastia, these conditions typically respond to physical activity and dietary changes.

A man may have both glandular and fatty gynecomastia at the same time since obesity is known to produce too much estrogen; however, glandular gynecomastia is not noticeable until a large amount of weight is lost.

The sensation in pseudogynecomastia or chest fat is typically the same as that of extra belly fat, which is soft to the touch and slightly jiggly. The sensation of glandular gynecomastia is significantly stiffer or almost rubbery. Gynecomastia can be detected by a hard, stiff lump that is felt beneath the nipple area.

The “breast” area can experience minor to moderate pain and soreness and may also look swollen due to gynecomastia. There are typically no pain or swelling symptoms associated with excess chest fat.

The appearance of fatty and glandular gynecomastia might vary slightly. The extra fat that grows on a man’s chest typically has an undefined form and looks saggy.When present, glandular gynecomastia resembles a woman’s breasts; they are rounded, and proportionate, and occasionally the nipple area extends further out from the chest.

Getting rid of gynecomastia can be difficult. Gynecomastia in teenagers can disappear a few years down the road when the hormone levels stabilize. But surgery might be required in some cases.

A surgical incision made just under the areola may be necessary to remove some firm glandular tissue beneath the nipple area in cases of gynecomastia. Depending on the patient’s needs, surgery can be done under general anesthesia or intravenous sedation. Liposuction is frequently also necessary to contour the chest area and achieve a more masculine-looking body. The nipple or areola may need to be repositioned during surgery if a sizable amount of tissue is removed to produce more natural-looking outcomes.

Gynecomastia is more challenging to treat than chest fat. Genetic factors can sometimes cause fat to accumulate in certain parts of the body, making diet and exercise ineffective. A liposuction is still an option in these situations. However, diet and exercise alone can treat chest obesity most of the time.

As you lose weight, you should see less fat across your body, particularly on your chest. Spot reduction is a misconception, although weight training can tone your chest and make fat appear less visible. Start an exercise routine at home or sign up for a gym membership. Avoid using lotions and pills because they may cause undesirable side effects.

While it might be challenging to tell the difference between gynecomastia and chest fat, some notable signs can help you do so.  If you are confused about whether you are experiencing gynecomastia or typical chest fat, make an appointment with a specialist for an official diagnosis and the best way to identify the cause, especially if you have troublesome symptoms like pain.